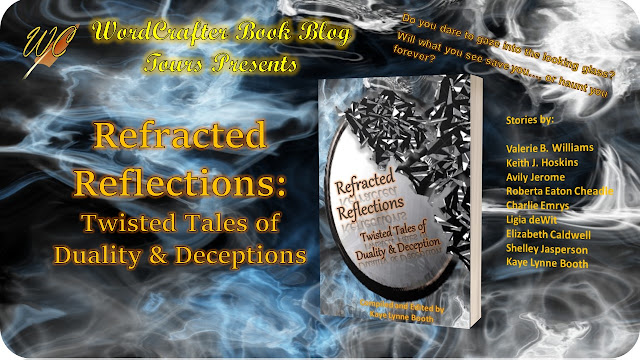 Mirror, Mirror on the wall, who is the fairest of them all?

In community college, I played the Mirror in the dramatic re-imaging of The Emperor has No Clothes. This anthology of short stories has a kinship with that play, as the image of the mirror takes on an important role straight into our imaginations.

What do you see when you look into the mirror? You? The past? The present? How about a future waiting to unfold? Or, do you see the sinister? Bloody Mary, perhaps? Or, shadows that move when you don't?

Refracted Reflections: Twisted Tales of Duality and Deception delves into those deep dark crevices of our shadow psyche. From inducing possession, committing murder/suicide or as cursed objects, mirrors have a unique hold on our imaginations. The short stories contained within the pages of this anthology will do just the same to its readers.

The Cost of Magic By Keith Hoskins tells the tale of vengeance. In this short story, mirrors are used as magical tools, but there was a penalty for using such a device. Magical mirrors extracted a price to those individuals who are gifted with knowledge through its spell work. Can magic be a means to an end?

The Elevator Ritual By Shelly Jasperson will send tingles down your spine as her character grapples with the suicide of a stranger, and the death of her sister in the haunted images of an elevator's mirrors. Would you survive the spirit in your reflection?

The Tinker’s Gift By Valerie B. Williams has a mirror that eases people beyond the veil by showing them their heart's desire: their beloved. Could a solider's last glimpse end a curse and bring balance back to the world?

Refracted Reflections has a mirror image worth shivering for... Happy Autumn Haunts!

One reveals truths, while the other bends light into varying shapes of deception. Does a small camp mirror reveal hope… or death?

Is the warrior in the mirror a monster… or a protector?

Does a glimpse in the  mirror reveal a young woman’s true self… or what someone else has shaped her into?

Does the mysterious portal to the future reflect what could be… or what must be left behind?

Are the dancers reflected in the water’s depth things of beauty… or evil?

This unique and imaginative collection of nine mind tantalizing fantasy and science fiction stories will appeal to readers who enjoy thought provoking tales with hidden meanings resting deep below the surface. These stories will keep you pondering long into the night.

If you liked Gilded Glass or Once Upon an Ever After, you’ll love Refracted Reflections.

For a chance to win a free digital copy of Refracted Reflections, just leave a comment to show you were here. Follow the tour and comment at each stop for more chances to win. Three copies will be given away in a random drawing.

Each of the stories included in Refracted Reflections feature a mirror or reflection in some significant way. The reflections given are sometimes surprising, often fooling those who gaze upon them, because things aren’t often as they seem.

I have included two of my own stories, “The Devil Made Her Do It”, which is a reprinted story about a woman blinded by love and deceived by a man who just might be the devil, which first appeared in Relationship Add Vice, from Zombie Pirates Publishing; and an original fairy tale, The Not So Perfect Prince, about a prince who is so full of himself that he can’t see who he truly is.

But mine are only two among nine outstanding stories by eight talented authors, and we’ll be introducing five of the contributing authors on this tour: Valerie B. Williams, Roberta Eaton Cheadle, Ligia de Wit, Elisabeth Caldwell, and of course me, Kaye Lynne Booth.