Movie Review: Atonement, but What Are We Being Redeemed For? Human Frailty?

Atonement is a mystery that unfolds first in a child's mind and as the story progresses the audience learns the truth about what actually occurred all those years ago.

What would happen if you had a chance to right a mistake? Would you do it as soon as you discovered your error? Or, would you wait decades after everyone is dead to confess?

These questions are what people should ask themselves. 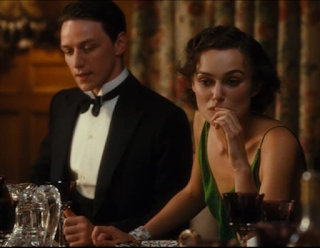 When Briony Tallis (Saoirse Ronan), thirteen-years-old and an aspiring writer, sees her older sister Cecilia (Keira Knightley) and Robbie Turner (James McAvoy) at the fountain in front of the family estate, she misinterprets what is happening, thus setting into motion a series of misunderstandings and a childish pique that will have lasting repercussions for all of them. Robbie is the son of a family servant toward whom the family has always been kind. They paid for his time at Cambridge and now he plans on going to medical school. After the fountain incident, Briony reads a letter intended for Cecilia and concludes that Robbie is a deviant. When her cousin Lola (Juno Temple) is raped, she tells the Police that it was Robbie she saw committing the deed.

When a series of misinterpretations of a young girl puts her sister's love for a servant's son in jeopardy, what will she do to right a wrong she caused?

Briony Tallis, played by Saoirse Ronan, is a brat of a child who mistakes adult behaviors as ones of depravity instead of what actually happened. She goes on to accuse Robbie of rape, when the real rapist is a friend of the family.

Cecelia Tallis, played by Keira Knightley, is in love with Robbie Turner. Her world is destroyed when her sister, Briony, lies about Robbie. Her family disintegrates because of that lie.

Robbie Turner, played by James McAvoy, is a servant's son and accused of raping a child that he did not. This lie by Briony led him to be convicted and later conscripted into the British military during World War II. Because the young Briony mistook his infatuation and love for her sister out of context.

Atonement is the search for redemption. After 21 novels, the writer, Briony Tallis, is decades older and has now brain disease, she writes her last novel giving her sister and lover the life they both deserved: a long and happy love affair. In all those years, Briony had never forgiven herself for being a headstrong and envious child, but she did nothing to correct her error when it mattered the most: when both Robbie and Cecilia were still alive. 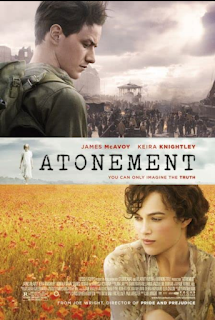 Older Briony: So, my sister and Robbie were never able to have the time together they both so longed for... and deserved. Which ever since I've... ever since I've always felt I prevented. But what sense of hope or satisfaction could a reader derive from an ending like that? So in the book, I wanted to give Robbie and Cecilia what they lost out on in life. I'd like to think this isn't weakness or... evasion... but a final act of kindness. I gave them their happiness.

This movie is a beautiful visual masterpiece. There is no argument there. If the audience takes the story on face value, then the narrative is a 10 out of 10 stars all the way.
Unfortunately, the story has some issues. The conviction of Robbie Turner of rape, would he be eligible for military service, even in wartime? Then there are the timing issues of world events, Dunkirk for instance, that do not match up with what the story shows. There are more discrepancies than these.
What felt disjointed at the end was an older Briony trying to make up for her lies with rewriting history in a fiction novel that is more autobiographical in nature. Instead of being contrite, she is matter of fact about the whole situation. The interview scene seems off. The editing jumped from here to there. Sometimes the viewer did not know where the story was headed or had been as a matter of the timeline. So when the interview with the older Briony was introduced, the scene felt odd at first.
The principle acting is superb. The visual photography and effects are fantastic. The narrative is emotionally gripping. However, the facts of the story, from a historical perspective, and editing appear to need some assistance.

For all the awards this film was nominated for and won, Atonement has its flaws.

Movies for Writers: Atonement is a period piece that tells an endearing love story but also a narrative of anger, jealousy, and regret.

Have a great and wonderful day.
Posted by Undawnted at 12:16 AM