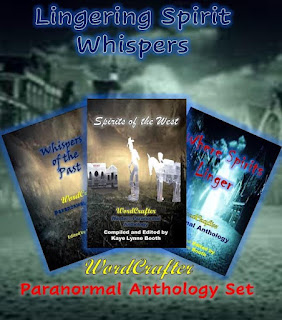 Author Interview: Kaye Lynne Booth
"Woman in the Water" (Whispers of the Past), "Don't Eat the Pickled Eggs" (Spirits of the West), "The People Upstairs" (Where Spirits Linger)

Where does your inspiration for writing stories stem from?

The inspiration for “The Woman in the Water” (Whispers of the Past) came as I was sitting in front of a roaring waterfall one afternoon. The whole story just unfolded in my mind with the real life setting as the background. I went home and typed it out on my keyboard until the whole tale was down.

The inspiration for “Don’t Eat the Pickled Eggs” came from a paranormal experience of a woman that I knew. Her boss had passed on and she believed that he came to her one night. This created the beginning for the tale of Lillie Belle, a saloon bookkeeper who experiences a visit from her saloon keeper and friend before she is aware that he is gone, and it’s up to her to solve his murder.

The idea for “The People Upstairs” rolled around in the back of my brain since I was a young girl, living at my grandmother’s home. Her housekeeper was an old woman who lived alone in a big house, but she only used three rooms, closing off the rest of the house, and she made some very strange claims, including one that there were people living on the second floor of her home. These ideas led to conversations with my mother and grandmother, and folks around town said that she was crazy. But she always had time to talk with me, even when she was working, and I considered her my friend. After she died, I missed her and I always wondered if maybe the things she said were true, if maybe she wasn’t crazy after all. “The People Upstairs” is the resulting story.

Were you always interested in becoming a writer? Or did this craft come to you later than your formative years?

I have been a writer since 1996, the year I sold my first poem. I floundered around trying to figure out what I was doing and the proper way to go about it. That didn’t come until much later, 2012, when I enrolled in Western State Colorado University to earn my M.F.A. in Creative Writing.

Writing is a passion for me. It helps me focus and helps me to keep my sanity. I think all people have a need to express themselves, but they do it in different ways. My self-expression just comes out in the written word.

Writing in the horror genre, specifically the subcategories of the supernatural and paranormal, is specialized. How is this genre different from others you have written in? I think you have to work harder to gain reader buy-in with fantastical genres. When I wrote my western novel, Delilah, I had to work to make readers buy-in to my tough, gritty female protagonist, but I don’t think that is nearly as big a challenge as trying to make readers believe the unbeleiveable.

Are you interested in writing the grotesque or psychological variations of horror?

I wrote a flash fiction piece, “The Haunting of Carol’s Woods” which was featured in Nightmareland, Book 3 of Dan Alatorre’s Box Under the Bed series. That one was inspired by a dream that I had and it was kind of creepy. But I’m not particularly interested in writing like Clive Barker or even Peter Straub.

Do you draw on any experiences you may have had in your life in order to write your stories?

Absolutely. Doesn’t every author? There is good sense in the old adage “Write what you know”. I’m a believer in ghosts and have had several personal experiences, maybe that’s why I like to write ghost stories.

What is the most horrific story you have read in a book/seen on the screen that stayed with you for years? Ever since I was a young girl I’ve been drawn to the horror genre. As a teen, my favorite author was Stephen King and I gobbled up everything I could get my hands on that he wrote, but I also liked John Saul, and Anne Rice. Stories such as those are sure to warp your mind just a little.

When I was fifteen I was babysitting and I found a copy of The Shining. After the kids were in bed, I picked it up and started reading. I found I couldn’t put and kept reading well into the night. At four a.m., when I started to nod off, I was too scared to go to sleep, so I called and woke my mother and made her talk to me until my nerves were calm once more. After I hung up with her I couldn’t resist finishing the rest of the book. I had to know what happened.

Whispers by Dean Koontz gave me a good case of the creeps and stuck in my brain after I learned that the ‘whispers’ were cock roaches. It sends shiver down my spine, even now.

There was a short story in a horror anthology that I read when I was pregnant with my oldest daughter, about a baby that was possessed and killed its mother. Understandably, that one stayed with me for a long time and really creeped me out, but I can’t even remember the name of the book or the title of the story now.

Did that influence your writing in any manner?

Horror is difficult for me to write. My brain is not that warped. I guess I am no Stephen King. Lol. But I do enjoy creating tone and setting for my paranormal stories, which are just a milder form of horror.

I’ve made several visits to a haunted hotel in Cripple Creek over the past year, The Hotel St. Nicholas. There may be a story brewing revolving that setting, but I think it would be set in the past, when it was the only hospital for the then booming mining town. The history will definitely play a vital role in the tale that develops, but I think paranormal vibes could steer the story in a particular direction. So, I guess the answer is both.

Thank you, Kaye Lynne Booth for your great answers about the writing craft and this anthology set. If you would like to know more about Ms. Booth, please see her biography and links below:

Kaye Lynne Booth lives, works, and plays in the mountains of Colorado. With a dual emphasis M.F.A. in Creative Writing, writing is more than a passion. It's a way of life. She’s a multi-genre author, who finds inspiration from the nature around her, and her love of the old west, and other odd and quirky things which might surprise you. She has short stories featured in the following anthologies: The Collapsar Directive (“If You’re Happy and You Know It”); Relationship Add Vice (“The Devil Made Her Do It”); Nightmareland (“The Haunting in Carol’s Woods”); Whispers of the Past (“The Woman in the Water”); and Spirits of the West (“Don’t Eat the Pickled Eggs”). Her western, Delilah, her paranormal mystery novella and her short story collection, Last Call, are all available in both digital and print editions. In her spare time, she keeps up her author’s blog, Writing to be Read, where she posts reflections on her own writing, author interviews and book reviews, along with writing tips and inspirational posts from fellow writers. She’s also the founder of WordCrafter. In addition to creating her own imprint in WordCrafter Press, she offers quality author services, such as editing, social media & book promotion, and online writing courses through WordCrafter 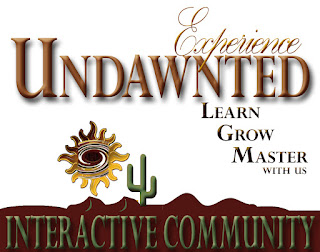 Posted by Undawnted at 9:58 AM