The Jonah Collector has been Submitted for Competition

I did not have a nautical story to tell...

...but some seafaring characters had a story to tell through me. 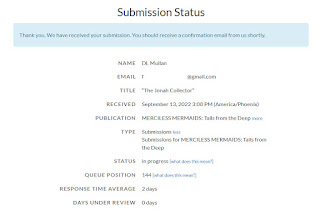 Imagination is fearless, and at times that open doorway into the magical and mystical swings the other way. Instead of the creator tapping into that creative force; the force taps into the creator. That is what happened with The Jonah Collector.

I had zero plans of writing and submitting a story for this anthology. I researched. I doodled. Nothing came to me, so I moved on, but the universe did not. One morning at the beginning of September, I woke up with characters, a plot line, and a beginning rhyme!

In the coming days, I wrote out the lyrical prose piece: The Jonah Collector. Based in nautical lore and actual ship lingo, this short story is beyond creative. 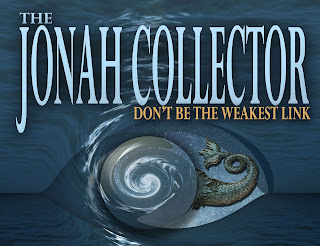 One of the character's namesake is from my genealogy too. That is in keeping with my Legacy Universe theme of honoring my ancestors in my writings.

When I finished the first draft, I was blown away. I edited, polished, and then submitted the piece on September 13, 2022, my grandmother's 119th birthday.

If the short story is accepted, A Novelist Idea Newsletter is having a party... when the anthology is released in 2023.

If the short story is not accepted, A Novelist Idea Newsletter will still have a party... when I release the publication sometime in 2023.

No matter what: it's party time!

Posted by Undawnted at 6:09 AM