Movie Review: Filth is a Tragic-Comedy about Office Politics, Mental Illness, and the Downward Spiral

Filth is the story of a Scottish police officer who slips from normality into madness. Detective Sergeant Bruce Robertson is out of control when he is sober, but when drugs and alcohol are introduced to an already fragile mind, he loses his grip on reality: totally, completely, fully.

Mental illness is the elephant in the room in Western society. This film shows the descent from barely hanging on to outright unhinged. The movie is a statement piece, and perhaps we should heed its warning.

The humor (is it Scottish humor? because I am checking my Scottish heritage card here) is repulsive at best: sex, drugs... and dance music. The writer is Scottish, we'll give him a break. If you like Blazing Saddles, then a film like Filth will not phase you. 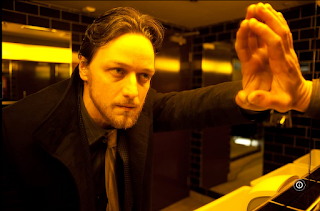 Filth
Scheming Bruce Robertson (James McAvoy), a bigoted and corrupt policeman, is in line for a promotion and will stop at nothing to get what he wants. Enlisted to solve a brutal murder and threatened by the aspirations of his colleagues, including Ray Lennox (Jamie Bell), Bruce sets about ensuring their ruin, right under the nose of unwitting Chief Inspector Toal. As he turns his colleagues against one another by stealing their wives and exposing their secrets, Bruce starts to lose himself in a web of deceit that he can no longer control. His past is slowly catching up with him, and a missing wife, a crippling drug habit and suspicious colleagues start to take their toll on his sanity. The question is: can he keep his grip on reality long enough to disentangle himself from the filth?

Bruce Robertson, played by James McAvoy, is a cruel, unapologetic Scottish police officer who treats people as he views the need to treat himself: with disdain, disrespect, and disloyalty. Since childhood, Bruce Robertson has suffered tragedy and guilt. He has bipolar disorder, for which he takes pharmaceutical medication as well as self-medicates with drugs, sex, and alcohol. The audience comes to understand that Bruce is an unfortunate and miserable soul, as he is remorseful over the death of his brother (an accidental death he caused) from childhood, his wife with their daughter has left him for another man, and he dresses up as his wife to feel a connection to his family. He is a man without hope, looking for redemption in a promotion to Detective Inspector.

When he is demoted from Detective Sargent to Constable for having his emotional, mental breakdown in full view of his colleagues, he plans his suicide. A knock on the door happens right as he is about to commit suicide. Does Bruce Robertson die at the end by his own hand, or is he saved by the woman he wishes he was good enough for? I think we all know the answer to that question. 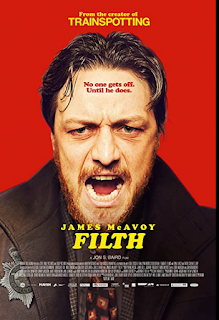 Bruce Robertson: The games are always, repeat always, being played. But nobody plays the games like me. Detective Sergeant Bruce Robertson, soon to be Detective Inspector Bruce Robertson. You just have to be the best, and I usually am. Same rules apply.

Although the film is disheveled in places where the pacing of the film is discordant with the plot, the plot itself meanders, its ribald comedic nature and dramatic death spiral, as the audience, we must understand we are seeing the world from Bruce Robertson's point of view. And, Bruce's point of view is unraveling before our eyes. We are descending with him into insanity.

Without an anchor of his wife and daughter, Bruce has no reason to remain stable or good or kind. Bruce has no reason to be stable, good, or kind to himself. He is crying out for help, and yet no one can see the desperate state he is in. A police department trained to see the signs of instability in the public is unprofessional and uncaring when the same characteristics present themselves in one of their own officers.

The games people play... with other people's mental health.

Thank you, James McAvoy, cast and crew, and Irving Welsh for bringing to light the horrible necessity [reality] for so many people to shove mental illness under the rug. Yet, hiding mental illness means that the problem goes unresolved. Filth is a tragic-comedy (black comedy) that isn't about depravity, profanity, or obscenity of a rogue police officer. This film is about the indecency of our society that ignores all the warning signs of mental illness and uses its own incompetence to ignore the cries of so many who require mental/emotional help.

The tragedy of this film is one of society's failures.

Movies for Writers: Filth is an opportunity to discuss and educate about mental illness.