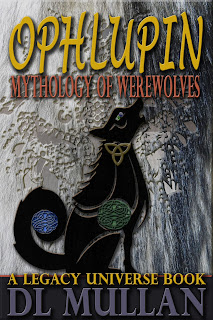 Werewolves have never had an easy existence. The relationship between love and hate seemed to define every aspect of the werewolf pedigree from their time as immortal gods and into the mortal realm.

Born or bitten, the one who bore the consequences soon learned: being a werewolf meant that curses are forever.

To the gods of old human pantheons, Ophlupin could not be defined, for he was more than a shape-shifter. As he grew from infant and child, so did his power. As a teen, he discovered that he could move in and out of phase with reality. Just like the phases of the moon, Ophlupin traversed space and time itself in his mother’s white rays. His father’s wolf attributes allowed Ophlupin power, beauty, strength, and the balance to harness the animal within and merge it with the moonlight.

He was no ordinary god. He eclipsed the other gods by miles. In their fear and haste, the gods cursed Ophlupin, and all those men and women who followed in his footsteps.

The gods did not anticipate that people would not fear him as they had. Soon, Ophlupin found ways around the gods' punishment and became a father. It appeared the werewolf curse could not be stopped. Until one day, a descendant fell.

The werewolf line seemed at a standstill. Would the species survive this newfound use for their abilities by other half-gods and immortals?

_____
Legacy Universe
This short story is a part of Undawnted's Exclusive Legacy Universe. Discover more details about Werewolf Mythology with A Known Wolf, a Legacy Universe Origin Story.
Are you on Team Lycidae? Then download this free badge for your website.
_________
Additional Images