A Novelist Idea Newsletter has a variety of information on a monthly basis to assist creators use different tools in order to grow their imagination. Another one of the advantages to Undawnted's community is the exclusive release parties. This month, the Saint Trilogy is being published.

The summer of 2018 saw the original story: Saint in the Big Easy released. With the conclusion of the series this month, DL Mullan has decided to re-release this summer adventure. Here's the scoop on the second installment, Saint in Communion:

Saint has been drawn into the age-old battle of good versus evil. Between devils, angels, and guardians, Saint has a lot to learn about her newfound reality. Her motto has gone from love me, love me not to: damned if she does, damned if she doesn't.

With the local Catholic Church's Cardinal Randolph taking an interest in her abilities, Eavanlee -with the help of her guardian Girard- discovers a world hidden behind the one she knew.
A secret sect of religious zealots, who call themselves: The Order of the Pure, has sought over the centuries to rid humankind of the Saint phenomenon. Their philosophy is that the Church is god's power on Earth, which to their egos makes them infallible in their assessment, and disbandment, of Saints.
Alone with knowledge that could kill her, Eavanlee discovers that her options maybe to trust those individuals whom she shares Communion.

Peruse the other goodies on the Saint dedicate pages here on Undawnted. 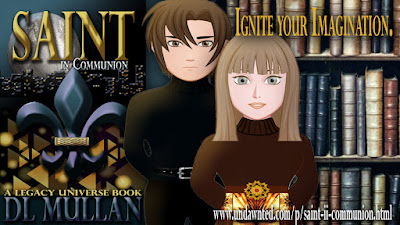 There's more to this party!

There is also a scavenger hunt for a free ebook.

This Release Party is the second of three for the month of August. Subscribe to Undawnted's A Novelist Idea August 2022 Newsletter for each date!

The Saint Trilogy was written for Undawnted's Summer Time Seasonal Reads Program. The book series was intended to be read by the pool, relaxing on a summer vacation. This story is light, but emotionally fulfilling.

Don't take our word for it! Order your copies this month!

Have a great and wonderful mid-August,

Posted by Undawnted at 6:28 PM